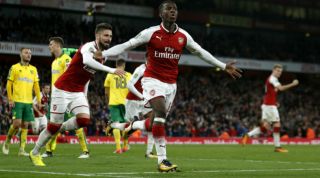 With five minutes remaining, Arsenal trailed Norwich 1-0 courtesy of Josh Murphy's first-half goal – so, with his side in grave danger of being dumped out of the League Cup, Arsene Wenger turned to England U19 forward Nketiah for inspiration.

The debutant, eager to make an early impression, sprinted on to help the Gunners as they won a corner.

Francis Coquelin flicked the ball on at the near post, and seconds later Nketiah was wheeling away in celebration having scored with his first touch in professional football.

The goal held particular significance, as the Lewisham-born striker became the first Arsenal scorer to be born after Wenger took charge of the club back in October 1996.

The 18-year-old wasn't finished there, though, and went on to net an extra-time winner to send Arsenal into Thursday afternoon's quarter-final draw.