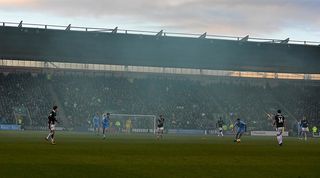 It's a reasonable assumption to make as a football fan that mid-table mediocrity means exactly that. No dreams, no expectations, no worries. Unambitious bliss.

But if League One is anything to go by this season, you'd be absolutely wrong.

That's because over half of the teams in the 24-strong league could viably get relegated this term, from 12th-placed (and top half) Plymouth to the doomed-looking Bradford City. A meagre three points separates the Pilgrims from 21st-place Walsall, who currently occupy the fourth and final relegation spot.

Below them, however, AFC Wimbledon are on a three-game winning streak and have given themselves hope below the melee; on the flip side, Southend three points above them are suffering a 10-game winless streak and Wycombe haven't tasted victory since January 26.

QUIZ Can you name the 50 English players with the most Premier League minutes this season?