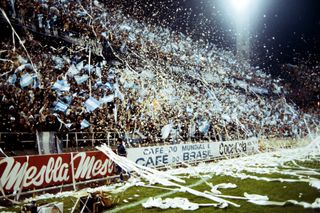 Welcome, one and all, to the new FourFourTwo.com. What you see before you has been years in the gestation and eight months in development. We sincerely hope it will be the perfect companion to the world's biggest football magazine – but you'll be the judge of that.

If you're after salacious gossip, this isn't the place for you (although for a couple of pints and a bag of pork scratchings, we'll tell you a story or two). But if you want intelligent opinions, great stories and original features, we welcome you with open arms.

The most obvious change to all but the least observant (and referees) will be the design. We hope you'll agree that it's bolder, cleaner, more beautiful to look at and easier to read. And if you like something, see more of it by clicking the red tag phrase.

But that's not all: this site is also built responsively, a fancy way for saying that whatever device you're using, the site will be optimised to give you the best experience. Try it on your smartphone or your iPad, or just resize the browser on your computer. See? It did work, didn't it?

Regular readers of FourFourTwo magazine will know that our success has been built on finding great stories and telling them with panache. Expect more of the same here. Our aim is to be the antidote to those lazy pundits: rather than enrage you by ineloquently re-describing what's blindingly obvious, we plan to wow you with our intelligent insight, searing analysis and storytelling magic.

As a starter for 10, try Nick Moore's Action Replay on 1974 – last time the managerial merry-go-round affected the top three clubs. And Michael Cox's look at Pellegrini's love of wide men.

3. Stats Zone: now in your browser

Our multi-award-winning iPhone app has been re-conceived for your browser, meaning that you can now follow real-time statistical coverage of every game in this season's Premier League, La Liga, Serie A, Bundesliga, Ligue Un and Champions League. You can access data from the last three Premier League seasons, enabling you to compare and contrast performances of players and teams.

Over the course of the season, we'll be using Stats Zone to help explain key moments in games, analyse player performances and look for trends – see Nick Harris's analysis of the shift from 4-2-3-1 to 4-3-3.

But it's as much your tool as ours: anyone who wants to can dive into quite extraordinary depth. We highly recommend it, as do the many Premier League analysts who already use it.

He's been asked a million times about winning the Champions League, but to the best of our knowledge, Lionel Messi has only once been asked to name his favourite insect. That his answer was "a monkey" just goes to prove that if you don't ask, you don't get.

At FourFourTwo, we always ask the questions that really matter… and occasionally questions about winning the Champions League. Every week, we'll be bringing you essential interviews with the men of the moment. Stay tuned for Cristiano Ronaldo's favourite reptile. And if that's not sufficient, our extensive archive covers everyone from Pele to Maradona, Paul Scholes to Paul Moulden… many of them being Asked A Silly Question.

By and large, we pride ourselves on not jumping onto bandwagons. Football may be a game of opinions, but that doesn't mean that some of them aren't ridiculous. Ask Sepp Blatter… or maybe don't.

But having our own opinions doesn't mean we won't listen to yours on the issues that matter, from the new site's design to our view on playing a World Cup in 50-degree heat. We want to know what you love, what you hate, what you're totally indiffere… ah, whatever. You can comment at the bottom of stories, post on Facebook, tweet at us or even email. We even accept letters by the post, theoretically.