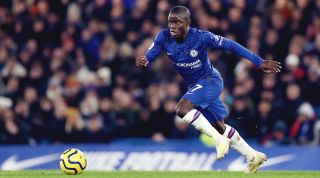 Has a defensive midfielder ever been as universally loved as N’Golo Kante?

Rarely has the Premier League witnessed such a romantic rise as that of the diminutive DM. It took just four years for Kante to ascend from Ligue 2 football in Normandy to becoming arguably the most beloved footballer in England.

It’s an astonishing trajectory: it’s like Tom Cairney becoming a born-again Makelele by 2024. Forget the back-to-back league titles and Player of the Year awards for second - Kante’s been so good that he convinced scouts that perhaps more talent was lurking down the back of the sofa of the French football pyramid. He walked so that Lys Mousset could jog; so journalists had names to link to Newcastle United; so Matteo Guendouzi could lose whichever forward he was supposed to be marking.

That Kante reached the cream with that cheeky grin and shy demeanour is even sweeter. In an ever-more physical era of the game, centre-mids are supposed to be built like bouncers, well-positioned and as humourless to match - yet here’s a pint-sized, free-roaming pickpocket running rings around proper players like David Silva. Barely anyone has dared call him a fraud - a delightfully rare phenomenon in contemporary sport.

The last two years have been a ceiling of sorts, though, for the Parisian. Last season’s talk switched from his incredible midfield omnipresence to Maurizio Sarri’s dastardly decision to play Kante as an interior in a midfield three. Sarri had his reasons, but he was never unanimously vindicated. Xavi, he is not.

With Frank Lampard now on the throne, Kante’s been out injured a lot. He was rushed back a couple of times in the early days, but as Chelsea have cooled into a more recognisable structure, Matteo Kovacic has emerged as the midfield centrepiece.

This is significant: it's the first time that N’Golo Kante is not his club’s ace card.

LEICESTER When is it time for Leicester City to start looking nervously over their shoulders?

It’s because of Kante doing the running for Leicester City’s whole midfield, that Claudio Ranieri’s 4-4-2 worked. It was similar under Conte too; Cesc Fabregas flourished and David Luiz had appropriate shielding. Even under Sarri, Chelsea needed a ball-winner at times. Goodness knows that wasn’t Jorginho - despite Sarri insisting how good his boy wonder was.

But Chelsea seem to have moved on this season. Football moves fast: this is a bold, young bluster of Blues who take the game to opponents, rather than sitting back like Conte and Claudio did - despite this side being noticeably Hazard-less. Lampard hasn’t exactly banished his smiling Frenchman, but he’s far keener to build a side in which the ball moves faster than the man. It’s not that Chelsea are better off without him. It’s that under Lampard, they look pretty damn good without a player who was considered vital just two years prior: that’s a bit like Virgil van Dijk not being Liverpool’s most important player come next World Cup. Kind of unthinkable, really.

And after a couple of botched attempts to gaffer-tape over the void in midfield, even Leicester look like they wouldn’t need a player like Kante anymore. Ndidi is a superior passer. Maddison and Tielemans are cheeky matadors, rather than bulls charging after possession. It’s front-foot football: midfielders ahead of the ball, rather than chasing after it.

That’s exactly the place the Premier League is at now. When Conte conquered England, having a ball-winner alongside a deep-lying playmaker was a necessity for success. We’re now in the age of footballers who do both; Rodri and Fabinho are warlords’ henchmen in compact systems. McTominay may be too one day, Ndombele too, should Jose Mourinho ever introduce the stepson he never wanted to the rest of the Tottenham family.

N’Golo Kante is not any worse than these players - and if he is, it’s not by that much. He’s not redundant in the Premier League, either. Far from it. It’s just Kante was a cheat code at his peak, and now other clubs are catching up to him.

Were Chelsea the kind of club that needed to sell players - apparently they’re not, judging by the summer rebuild - then Kante could well have been boxed up and moved on. He’s 30 next year, had his recent injuries, and what kind of player does he become, should he lose his physical ability? A friendlier Arturo Vidal? A Lucas Torreira-type without the yearning for Italian sunrises?

As it is, N’Golo Kante will probably stay at Stamford Bridge. Once the definitive Premier League midfielder, an omnipresence in midfield, retreating to more of a background role. It’s not that he’s getting worse, it’s that everyone else is getting better.

And the best thing about him? He’s so ego-less, he probably doesn’t care.