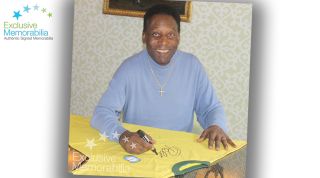 With the greatest respect to your treasured family portrait, we think we know what would look better on your wall: a shirt from one of the greatest footballers of all time, perhaps?

Yes, probably that (sorry, gran) – and you could have it thanks to this unmissable competition from Exclusive Memorabilia, who are giving away a retro Brazil 1970 shirt signed by Pele.

The legendary Brazil striker remains the only footballer ever to win three World Cups, having done so in 1958, 1962 and 1970 – the latter as part of a stunning Seleção side which dismantled Italy 4-1 in the final.

Depending on who you ask, Pele might be the greatest footballer of all time thanks to his unrivalled success in football’s greatest competition – as if you needed any more motivation to be in with a shout of winning this incredible prize.

Exclusive Memorabilia is one of the UK’s most trusted signed sports, TV and film memorabilia brands. All of the items they sell are from private signing sessions with the athlete or celebrity – in this case, with Pele in Bath on June 2, 2017 – and come with proof of authenticity. All signatures are originals and never printed.

With signed shirts, balls and photos from over 50 players across 30 different teams, Exclusive Memorabilia’s stock of signed football memorabilia spans far and wide. From World Cup winners including Pele and Sir Geoff Hurst, to all-time greats such as Cristiano Ronaldo, Dennis Bergkamp and Eric Cantona, there’s something for every football fan.

To be in with a shout of getting your hands on the signed Pele shirt, and for full terms and conditions, simply head to https://www.exclusivememorabilia.com/competitions and answer this easy-peasy question: Which English goalkeeper famously denied Pele with the 'save of the century' at World Cup 1970? Was it a) Gordon Banks b) Peter Shilton or c) Ray Clemence?

And that's not all: if anything else tickles your fancy, we have an exclusive 10% discount code* on all signed memorabilia just for FourFourTwo readers. Simply enter the code ‘FOURFOURTWO’ at checkout and watch the magic happen.

*Ends August 31, 2019. Available on all products. Not to  be used in conjunction with any other offer.