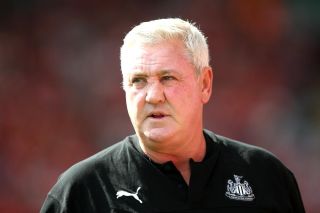 Steve Bruce found himself firmly in the firing line after Newcastle’s humiliating 5-0 Premier League capitulation at Leicester on Sunday.

Just eight games into his reign at St James’ Park, the Magpies’ head coach is feeling the full backlash from fans still furious at the departure of predecessor Rafael Benitez during the summer and fearing the worst following an alarming start to the season.

Here, the PA news agency takes a look at the problems facing Bruce.

Bruce knew the day he accepted the task of replacing Benitez that he was not, in his own words, “everybody’s cup of tea” and that the only way he could win over his doubters was with results on the pitch. The antipathy he met on his return to his native Tyneside was founded more on the club’s failure to retain the hugely-popular Spaniard’s services rather than the identity of his successor, but one victory in eight games in all competitions – albeit one secured in impressive style at Tottenham – has done little to quell the air of discontent. The fixture list has not been kind with the Magpies facing five of last season’s top six in their first nine league games, but a return of five points from the first 21 available to date is deeply worrying.

Bemused by the club’s transfer policy during his tenure, Benitez repeatedly employed the metaphor of a short blanket, with which you could keep either your head or your feet warm, but not both at the same time, to describe his squad. In essence, he meant that his team would leave itself short in defence if it attacked, or would create too little if it was defensively solid, and his challenge was to find a balance, which he largely managed to achieve by drilling his players relentlessly and forging a commendable collective spirit and organisation. That cohesion has been sadly lacking under Bruce and while changes in personnel and system are mitigating factors, the blanket has been full of holes.

Ashley’s business model is no secret and while Benitez managed to negotiate some wiggle room during his early months at the helm, the concentration on recruiting younger players with a potential sell-on value remains very much in force. It was for that reason that the club refused to sanction a permanent move for striker Salomon Rondon during the summer of 2018 or, despite a season on loan during which he gave the team a new focal point, the last transfer window, when the 30-year-old would have cost them less than half the £40million they paid for Joelinton. In addition, the Magpies hierarchy was unwilling to offer midfielder Mohamed Diame the two-year contract he wanted and he has also been a miss.

Newcastle’s seven league games to date have yielded just four goals, and only one of them has been scored by a striker. Joelinton’s winner at Tottenham demonstrated his ability, but chances have been few and far between for the 23-year-old Brazilian, who has had little opportunity to start paying off his club record fee. With £21million January signing Miguel Almiron yet to open his account and Allan Saint-Maximin having been hampered by injury since his arrival from Nice in a deal which could eventually amount to £20million, Bruce needs to find a way to earn a return on that investment.

Bruce is the latest manager or head coach to find himself plunged into the yawning chasm between Ashley and the club’s supporters and while the Toon Army remain firmly behind their team on the pitch, the call to boycott home games in protest at the sportswear magnate’s ownership is having an effect. There were almost 9,000 empty seats at St James’ for the 0-0 draw with Brighton on September 21 and while Manchester United’s arrival this weekend is likely to attract football tourists, the attendance is unlikely to be close to capacity once again.