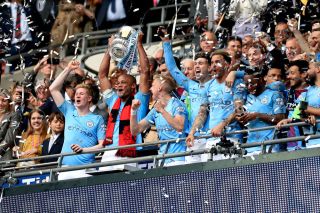 Once upon a time Portugal star Bernardo was not even City’s best midfielder called Silva. Now though the 24-year-old arguably shades his namesake David when it comes to creative magic. Bernardo’s sumptuous pass for Gabriel Jesus’ first goal sealed this victory for City. The arced ball unpicked Watford’s defence and etched City’s name onto the silverware. Pep Guardiola recently admitted Bernardo’s form has been so stunning that he simply cannot afford to drop the diminutive maestro. Any team that can leave Kevin De Bruyne on the bench, even if not fully fit, boasts serious talent. And as it stands, Bernardo heads that vanguard of quality.

England star Sterling’s fine season ended on a serious high, the 24-year-old bagging a cup final hat-trick. His growing statesmanship around racism in the sport has won Sterling many friends and admirers this season but his increasing influence on the field and especially his improvements in finishing have elevated him into a new category. Boss Guardiola will demand more again, and few would bet against Sterling delivering.

A packed Wembley was a sight to behold, with both sets of supporters doing their clubs proud to restore the FA Cup magic and importance. There was no need then for all the curious pre-match entertainment, least of all a DJ set from Annie Mac. The theme from TV show Stranger Things proved a low-key soundtrack choice for the incidental moments too. The actual action did not disappoint, and as always organisers would do well to remember the product needs no adornment.

City will be hard pressed to find another leader of Kompany’s calibre:

Captain Vincent Kompany’s 11th year at Manchester City could prove his last, if the talisman defender does not take up the one-year extension to his current contract. How City would miss the Belgium stopper’s huge overarching influence were he to leave. While his abilities speak for themselves, it is his gritty leadership which has helped drive this City group to greatness. Yes, others will supersede him in time as at 33 his best years are in the past but – for now – City should keep him around for yet more glory.

12. SAVE! Brilliant from @edersonmoraes93 who's out quickly to deny Pereyra with an out-stretched leg after a sharp Watford counter attack. WARNING SIGN!— Manchester City (@ManCity) May 18, 2019

Peter Schmeichel was Manchester’s king of one-on-ones for a glittering United era. Now City keeper Ederson has the chance to rival the great Dane’s renown for thwarting strikers at every turn. For when Watford threatened early on, Ederson was off his line in a flash to deny Roberto Pereyra. While Schmeichel’s art revolved around making himself as big as possible to fill the goal and distract those haring in, Ederson’s speed off his line sets him apart.