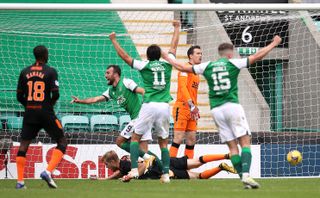 Rangers’ lead at the top of the Scottish Premiership was cut to a point following the latest weekend of action.

Celtic were pushed to the end in a 3-2 win over Livingston but finished the weekend two points closer to their rivals after Hibernian held the leaders to a 2-2 draw in Edinburgh.

Elsewhere there were wins for Kilmarnock, Dundee United, Ross County and Motherwell.

Here, the PA news agency looks at five other things we learned from the weekend’s fixtures.

Celtic have a genuine alternative up front

Albian Ajeti demonstrated why Neil Lennon felt comfortable giving fatigued star striker Odsonne Edouard a rest, by sweeping home a fabulous finish to claim his fourth goal in five league games. The Frenchman had to carry the vast majority of Celtic’s goalscoring burden last season before Leigh Griffiths returned to fitness, but Ajeti has added extra threat amid the fresh absence of the Scotland striker.

🥅 When the Captain steps up to give you the lead… pic.twitter.com/1KInfISb3S— Ross County FC (@RossCounty) September 20, 2020

Callum Davidson’s team have conceded the opening goal in seven of their eight games. With just two wins so far, that is a problem the Perth boss needs to fix sharply. Saturday’s defeat by Ross County was their fourth 1-0 loss in five matches.

Lawrence Shankland is up and running

After netting 24 goals in 26 Championship games for Dundee United, expectations were high for the Scotland striker this season. However, an ankle problem meant Saturday’s visit of St Mirren was only his second start. The forward lit up the first half with a brilliant volleyed finish to claim his first Premiership goal and more look set to follow.

Rangers’ defence can be breached

Steven Gerrard’s team had set a new British record after kicking off the season with seven straight clean sheets but in truth they had been rarely tested in those opening fixtures. Their streak was shattered as Drey Wright and Christian Doidge capitalised on some slack play in the Rangers back four to net at Easter Road.

Motherwell have rediscovered their form

The Steelmen began the weekend bottom of the table despite grinding out victory over St Johnstone last time out. But they delivered a confident display to record a 3-0 victory at Aberdeen, who failed to muster a shot on target.