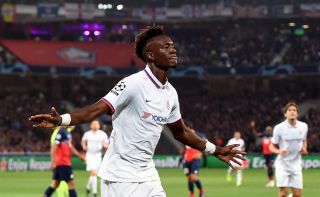 The Chelsea striker is back in the Three Lions squad for Euro 2020 qualifiers against the Czech Republic and Bulgaria after a brilliant start to the season for his club.

The 22-year-old, a prolific scorer at youth levels, was first involved with the senior team in 2017 when he played in friendlies against Germany and Brazil ahead of the World Cup, but has not played since.

He has forced his way back into the reckoning, though, thanks to his fine goalscoring form for Chelsea under Frank Lampard, where his seven Premier League goals make him the country’s leading scorer.

“I mean, he’s the leading English goalscorer in the league,” Southgate said.

“He’s obviously a player we put into the squad very young at a time when we wanted to look at some younger players and change the complexion of what we were doing back in November, ahead of the World Cup.

“That was a bit early for him, and now it’s brilliant, the opportunity he’s been given by Frank, along with some of the other young English players at Chelsea, so that’s been fabulous for them.

Abraham is joined in the squad by his Chelsea team-mate by Fikayo Tomori, who has received a maiden call-up having impressed since breaking into the Blues’ side this season.

“I think that his profile as a defender fits with the way that international football is,” he said.

“Athleticism is important, he’s capable with the ball, we think it’s a good opportunity for us to have a closer look at him with training in our group because we haven’t worked with Fik as closely as some of the other players throughout the age groups.

“And he’s in good form and will be feeling confident about himself. So, he’s played very well for Chelsea in some big games against some big opponents. It’s, again, a great opportunity for him.”

While the Chelsea pair will be toasting their call-ups, Southgate offered hope to those players who have not made the cut.

Manchester United’s Jesse Lingard and Aaron Wan-Bissaka, as well as Alex Oxlade-Chamberlain of Liverpool, dropped out of the squad while the likes of Dele Alli and Kyle Walker failed to earn a recall.

“There are some really tight calls and difficult conversations to have with players. But I think over a couple of years we’ve made good decisions, generally, and we’ve got to make sure we watch every game, which we do – and we keep those assessments as clean as we possibly can.”