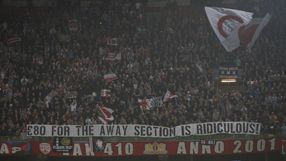 Fans held a lot one banner saying "against modern football" and another which depicted a sheikh holding a bag with a dollar sign, with a red line drawn across it.

Another banner said "80 euros for the away section is ridiculous" and other supporters displayed banners with offensive messages aimed at Manchester City, Chelsea, Red Bull Salzburg and Red Bull Leipzig.

UEFA said the Dutch club had been fined 10,000 euros for "display of a provocative and inappropriate banner."

Ajax won the old European Cup four times, the last in 1995, but have been unable to compete with the financial clout of newly-rich clubs.

The Dutch side were knocked out in the group stage of this year's Champions League along with City.