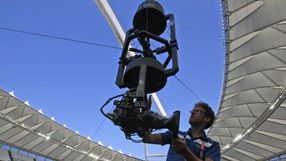 The Qatar-backed company will share the rights with free-to-air channels TF1 and M6, who as part of their package will broadcast France games which have to be shown on free TV under French law.

Al Jazeera is using France as a testing ground for its ambitions to be an international pay-TV sports broadcaster having already become the Middle East and Africa's most popular sports network.

The French channels - dubbed beIN Sport - are set to launch in early June and will cost 11 euros a month, according to multiple industry sources.

Nasser Al Khelaifi, who heads beIN Sport as well as Qatar's sports investment fund which owns Paris Saint-Germain, welcomed the decision by European football body UEFA but did not specify how much Al Jazeera had paid for the rights.

"We are very pleased with this new partnership with UEFA," he said in a statement on Wednesday.

"This will allow the future subscribers of beIN Sport to be the only ones in 2012 and 2016 to be able to watch all of the matches of the Euros."

France was one of the last countries to select broadcasters for the competition, which begins on June 8 and is being held in Ukraine and Poland.

The agreement will see TF1 and M6 each pay 50 million euros for the rights to 19 matches in the 2012 competition and 22 in the 2016 tournament to be held in France.

TF1 will show the first match of the French national team and the final. M6 will have the opening game, two of France's three group phase matches and a semi-final.