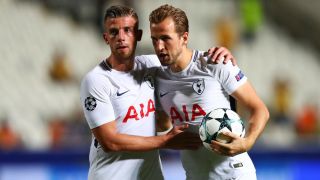 Toby Alderweireld plans to provide inside information to help Belgium keep England captain Harry Kane quiet at the World Cup, even if it is "difficult to stop" his Tottenham team-mate.

Defender Alderweireld has helped the Red Devils reach the knockout rounds in Russia, with comfortable wins over Panama and Tunisia seeing them qualify from Group G.

With Kane on form - the 24-year-old has a tournament-high five goals already - England are also already certain to progress from the same pool.

The two European nations meet on Thursday in Kaliningrad with the victor certain to go through as group winners, potentially paving the way for an easier path to the latter stages.

Having played on the same team as Kane since joining Spurs in July 2015, Alderweireld knows all about the talents of the leader in the Golden Boot race - and not just in terms of putting the ball in the net.

"Hopefully it’s an advantage for the defenders," the centre-back told Standard Sport.

"I know his strength, of course. But his strength is that he's good at everything. He's quick, he's strong, left foot, right foot, headers.

"It's so difficult to stop him. That's what I know. As a team, we have to be tough [in order] to beat him.

"He just breathes football. He wants to improve, improve, improve. He's not only a goal-scorer. He works so hard for the team. He's available to help the plays. He's the all-round striker."

Kane scored three times in the 6-1 thumping of Panama on Sunday, making him just the third Englishman - after Geoff Hurst and Gary Lineker - to hit a hat-trick at a World Cup.