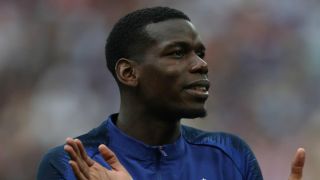 Juventus head coach Massimiliano Allegri admits Paul Pogba's performances at the World Cup caught his eye but stopped short of expressing an interest in bringing the midfielder back to Turin.

After a season of mixed fortunes at Manchester United, where he impressed and frustrated across the course of a campaign that yielded only runners-up spots in the Premier League and FA Cup, Pogba was inspirational for France in Russia and scored in their 4-2 final victory over Croatia.

The 25-year-old's international team-mate Blaise Matuidi called for Pogba to return to Juventus amid France's celebrations, and it has been rumoured he would be interested in heading back to Serie A to link up with new signing Cristiano Ronaldo.

Allegri – who allowed Pogba to leave Juventus for an initial €105M in August 2016 after four glittering seasons with the Bianconeri – praised the midfielder for coming of age at the World Cup but would not confirm any concrete interest in a transfer.

Merci to all the supporters for the season with us, for being part of my life and letting me enter yours. Without you, we can’t be UNITED. May 20, 2018

"I can only say I'm happy for having seen him grown up in an important competition like the World Cup," Allegri told reporters.

"He played with great personality. Compared to the past, he matured a lot."

Allegri watched his players beat Bayern Munich 2-0 on Wednesday in the International Champions Cup, and he praised new arrivals Emre Can and Joao Cancelo for "improving the team" in their first pre-season outing.

Juve's goals were scored by 21-year-old forward Andrea Favilli but Allegri indicated that it was too soon for him to compete for a first-team place.

"Favilli is a good player," he said. "He has great potential and great skills, but I think he is about to move to Genoa on loan for next year."