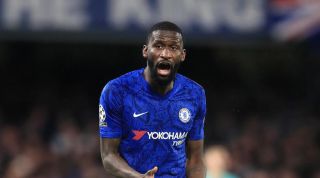 Antonio Rudiger admits Chelsea need to improve their defensive record as they seek a top-four finish.

Frank Lampard's side remain five points clear of the chasing pack despite suffering a 1-0 defeat by Newcastle on Saturday.

Manchester United, Tottenham, Sheffield United and Arsenal also dropped points at the weekend, although Wolves moved to within five points of Chelsea after beating Southampton.

No team in the top seven of the Premier League has conceded more goals than the Blues, whose backline has been breached 30 times this season.

And Rudiger has called on his team-mates to be more "committed" in the coming weeks and month.

"It was the first time it's been really silent," the German told the club's official website, referring to the mood among the Chelsea squad following Saturday's loss.

"Everyone was a bit down. It was an unfortunate game because we really tried everything but at the end we were sloppy.

"I have to take the blame myself for that. All of us who played in defence have to – at centre-back, right-back, left-back, it doesn’t matter.

"It’s not only on Kepa, it’s a collective thing, it’s the whole team. We need more commitment in the defensive phase and I feel like that was lacking a bit."

David Luiz will line up for Arsenal against his former club in Wednesday's London derby at Stamford Bridge.

Fikayo Tomori, Kurt Zouma and Andreas Christensen have all battled with Rudiger for a place in the starting XI this season, and the former Roma stopper is impressed with Chelsea's depth at centre-half.

"There have been a lot of ups and downs but it’s normal to have competition," he added. "We have really good centre-backs and you should always be in for competition because that makes everyone better. At the end of the day, the coach then decides.

"I’m very happy for Fikayo because he has really developed well. I’ve known him since I moved to the club as he was always there in the pre-seasons before he went on loan. You can see now he’s doing very well and this is the way the club is going – they want academy players to make it in the first team and obviously now there are a lot of them here so it’s very good."