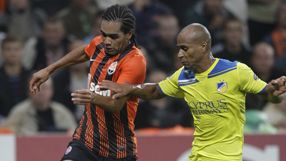 APOEL took the lead against the run of play when striker Ivan Trickovski stunned the home side by finishing off a rare counter attack in the 61st minute.

Shakhtar, who missed a hatful of chances throughout the game, were level within three minutes when Jadson guided the ball into the net after taking advantage of a poor clearance.

The result means APOEL lead the group with four points from two games while Zenit St Petersburg, who beat Porto 3-1, and the Portuguese have three points each with Shakhtar on one.

"We will put the group standings into a frame because it is really surprising," said APOEL coach Ivan Jovanovic. "It's an honour to play with teams like Porto, Zenit and Shakhtar among which we are the youngest.

"But our aim is the same. We play with soul and heart and write a new page in the history of our club."

Shakhtar, who reached the quarter-finals last season before being thrashed by eventual champions Barcelona, came into the game full of confidence and pinned APOEL in their own half.

However, Mircea Lucescu's side struggled to break down a well-organised Cypriot defence although they went close to opening the scoring five minutes before the break.

Luiz Adriano's strike from the edge of the area was heading goalwards but was deflected over the bar by a defender following a low cross from Dario Srna.

Moments earlier Henrik Mkhitaryan was denied by visiting keeper Dionisios Chiotis when the Armenian midfielder raced into the area but shot weakly after Luiz Adriano's pull-back.

"We should have had a cooler head in the final phase of the goal attempts," said Shakhtar coach Lucescu. "Their goalkeeper was very confident and produced a few brilliant saves. Should we perform like today we can beat Zenit and Porto."

A sleepy first half turned into an entertaining affair after the interval with APOEL spicing things up.

The visitors, who rarely troubled a home defence missing suspended key central defenders Dmytro Chygrynskiy and Yaroslav Rakytskiy after both were sent off in the Ukrainian side's opening 2-1 defeat at Porto, suddenly broke the deadlock.

Trickovski exchanged passes with Constantinos Charalambides, who came off the bench after just three minutes to replace the injured Gustavo Manduca, squeezed into the box and slotted a low shot into the far corner of the net.

APOEL's joy was short-lived with Brazilian Jadson finding the equaliser after compatriot Willian broke down the right and sent over a deflected cross that caused panic in the defence.