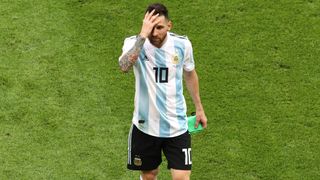 It was a forgettable campaign for Messi and Argentina, who were eliminated by eventual champions France in the last 16 at Russia 2018 as Jorge Sampaoli later departed.

Argentina's tournament was marred by reports of unrest following a 3-0 group-stage defeat to Croatia after a 1-1 draw with Iceland left the South American giants on the brink of a humiliating exit.

Messi – still searching for his first senior international title – and Argentina managed to sneak into the knockout phase thanks to a last-gasp win over Nigeria but the team's shortcomings were exposed against France.

Tevez urged Argentina to do more to ensure the country's all-time leading goalscorer can succeed on the world stage.

"I think Leo has to think about himself," Tevez – a 76-time Argentina international – told ESPN. "He has to think that, if there is not a project that makes him happy and in which he feels comfortable, it is very difficult to take the responsibility of leading Argentina to become champions by himself.

"Now [I tell him] to rest, keep a cool head and try to be well, then we need him to take charge and on the pitch."

In the meantime, the focus is on Argentina replacing former head coach Sampaoli.

Peru boss Ricardo Gareca and Colombia's Jose Pekerman have been linked with the vacant post.

Pekerman led Argentina at the 2006 World Cup and Tevez – who was part of the squad that reached the quarter-finals in Germany – believes the Argentine Football Association (AFA) should bring back the 68-year-old.

"They taught me to be a professional at 14 years old and today I continue at 34. It is essential to start as a child. From my personal experience, I think Jose is the man who can do it [be Argentina coach] quietly because he knows what is being talked about."