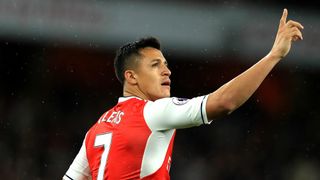 Alexis Sanchez netted twice in the final 20 minutes to help Arsenal to a 2-0 Premier League win over Sunderland and keep their top-four hopes alive.

The Sunderland goalkeeper was unable to prevent Sanchez from delivering Arsenal the win, though, as the Chilean was left with an easy finish by Mesut Ozil with 18 minutes left on the clock, before adding a second in the 81st minute.

Arsenal find themselves trailing fourth-placed Liverpool by one point heading into their final game of the league season following Tuesday's win.

A win over Everton will be enough to secure Champions League football if Liverpool lose to Middlesbrough on Sunday, while a draw could still do the trick for Arsene Wenger's side.

Arsenal made an encouraging start and Sanchez thought he had opened the scoring in the ninth minute with a powerful shot from outside the area that took a deflection off Olivier Giroud's arm, only for referee Roger East to rightly disallow the goal.

The home side continued to push for the opener and Giroud was unfortunate to be denied by goalkeeper Jordan Pickford after a clever throughball from Aaron Ramsey, before Hector Bellerin curled a shot just over the crossbar.

Sunderland slowly grew into the game from there on and Didier Ndong and Jermain Defoe both got chances to break the deadlock late in the first half, goalkeeper Petr Cech pulling off two smart saves to keep things all square.

Bellerin then should have handed the hosts the lead in the 44th minute when sent clean through on goal by Ozil, but the right-back hesitated for too long and eventually only hit the side netting from a narrow angle.

Arsenal continued to dominate after the break and Giroud came within inches of handing the hosts the lead when he beat his marker to Rob Holding's cross from the right, seeing his header going just wide at the far post.

Wenger then brought on Danny Welbeck and the former Manchester United man almost made an immediate impact, forcing Pickford into a smart save with his low strike from just inside the box.

There was nothing Pickford could do to deny Sanchez, however, the Chile international coolly slotting the ball into the empty net after being presented with a gilt-edged chance by Ozil.

The Sunderland shot stopper then pulled off a number of fine saves to keep his side's hopes of salvaging a draw alive, but he was eventually beaten a second time by Sanchez in the 81st minute, the forward again tapping home from just yards out to seal the win.