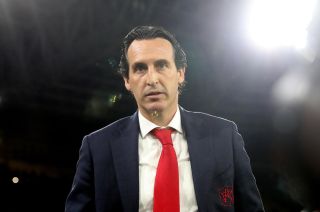 Unai Emery believes attack will be the best form of defence for Arsenal when they head to Valencia looking to secure a place in the Europa League final.

The Gunners travel to Spain next week for the second leg of their semi-final clash having won 3-1 at the Emirates Stadium in Thursday’s opening leg.

Alexandre Lacazette netted a first-half brace to cancel out Mouctar Diakhaby’s deserved early opener for the visitors, with Pierre-Emerick Aubameyang adding a third in the final minute.

The Gunners will guarantee themselves a place in the final in Baku on May 29 if they concede fewer than two goals at the Mestalla.

But, having been impressed by his strike partnership in the first leg, former Valencia coach Emery is keen to kill the tie off with more goals rather than sending his side out to rest on their laurels.

“They are going to feel strong with their supporters there. Aubameyang and Lacazette played very well.

“We managed to get in dangerous situations near their goal, and in the first half towards the end we got in four to five times out wide.

We've got the advantage going into next week – but there's still plenty of work to be done 👊#ARSVAL#UEL— Arsenal FC (@Arsenal) May 2, 2019

“The game was played in strange circumstances given how it started…there were moments where we got things right and times when we didn’t, and they could have scored in the second half.”

Despite the win, Emery – who won three consecutive Europa League titles while at Sevilla – insists the tie remains firmly in the balance.

“It’s not normal Valencia concede three goals. They are a very, very good team,” he added.

“And it is the reason I am very proud of our work today but it’s going to be very difficult.

“I still believe that the tie is in the balance, we know how tough it will be to beat Valencia again. And they will be looking to respond.”

We stay together through the ups and downs. We believe in this courageous team to turn things around and make it happen with the help of MESTALLA 🦇 pic.twitter.com/0DGe8x8YbA— Valencia CF English 🦇💯 (@valenciacf_en) May 2, 2019

Valencia coach Marcelino thought his side matched the hosts for much of the game and still believed the Laliga outfit could make the final.

“We are very sorry that we didn’t manage to get a better result this evening. Arsenal made the most of their opportunities, their first two attacks resulted in goals,” he said.

“We know how tough it will be to win 2-0 against a very good side but, if we have our fans behind us and get things right next week, we know that we can do it.

“We played well and the goal towards the end was a surprise, nobody was expecting it. And it makes it a more difficult situation for us. (But) it doesn’t take anything away from our thoughts that we can still reach the final.”