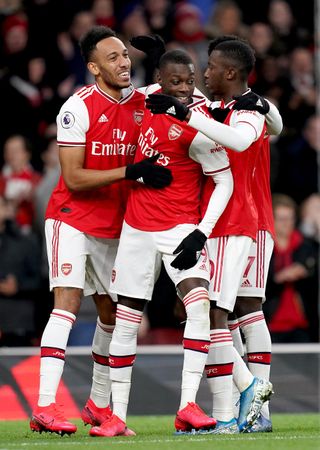 Mikel Arteta remains hopeful Pierre-Emerick Aubameyang will be an Arsenal player beyond the summer after the forward’s latest goalscoring exploits.

The 30-year-old bagged a brace on Sunday as the Gunners recovered from conceding after 49 seconds to beat Everton 3-2 in a thrilling Premier League clash.

Eddie Nketiah cancelled out Dominic Calvert-Lewin’s acrobatic early opener before Aubameyang struck either side of Richarlison’s equaliser to give the Gunners a third straight win in all competitions.

Aubameyang, who tops this season’s Premier League goalscoring charts alongside Jamie Vardy with 17, is out of contract at the end of next season and has been linked with other clubs.

“They are completely right to want him because he is a superb player,” Arsenal boss Arteta said.

“He completely deserves to be liked by all the other teams. Hopefully we can convince him that this is the right place for him and that he has a future here.

“I’m so happy with him. Obviously because he’s scoring very important goals for us, but as well as a captain, he’s a great example to everyone else.

“Hopefully, not just the wins (will convince him to stay) but what we are trying to do.

“Does he really enjoy walking out on to the pitch every time he goes? It’s very much part of what we are trying to build here and I think he is with that mindset at the moment.”

Everton manager Carlo Ancelotti was critical over his side’s defensive performance after they conceded three goals in 19 minutes.

The Toffees have not kept a clean sheet away from home in the Premier League since August and their defensive woes led to the end of their five-match unbeaten run which had put them in contention for a European spot.

“(I am) really disappointed,” Ancelotti said.

🗣 | "I'm not happy, of course. The performance was good offensively, but we conceded three goals too easily."@MrAncelotti's #ARSEVE verdict… pic.twitter.com/WcBql9SdU9— Everton (@Everton) February 23, 2020

“So, I cannot be satisfied for this because we want to win here against a strong team and you have to defend well and attack well.

“The attacking play was good, we had a lot of opportunity to score more goals, but defensively we were poor so this is the focus that we are going to have next week because we have to defend better.

“I think that we started well, we were lucky to score the goal at the beginning and then we had good control and we had good opportunities to counter attack but we conceded two goals too easy.”