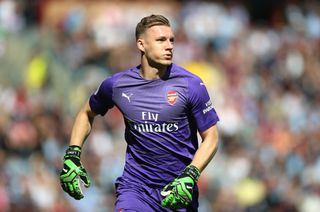 Bernd Leno admits Arsenal were lucky not to lose at Watford on Sunday as his goal was peppered with shots on an afternoon to forget for the Gunners.

Pierre-Emerick Aubameyang’s first-half brace appeared to have Arsenal on course for a Premier League victory, only for the Hornets to welcome Quique Sanchez Flores back into the Vicarage Road dugout by staging a comeback as the visitors’ defence crumbled.

Sokratis Papastathopoulos gifted possession to Gerard Deulofeu as the Gunners looked to play out from the back, with Tom Cleverley punishing the Greece international by converting as a result.

Things went from bad to worse when David Luiz tripped Roberto Pereyra inside the box and the Argentinian substitute converted the resulting penalty to level the scores.

In total, Watford had 31 shots during the game compared to just seven for Arsenal and Leno conceded leaving Hertfordshire with a point may have even flattered the visitors.

“I think in the second half we lost completely the control of the game,” the Germany international said.

“The distance from the midfield to the strikers and all the distances from the players were too big. Watford deserved at least the draw.

💬 "The first goal was unlucky but that is the life of a goalkeeper. After that, I needed to stay positive and stand up."— Arsenal (@Arsenal) September 2, 2019

“It was very frustrating because we controlled the game but also in the first half, you could see that we made two easy mistakes and then at the end we conceded two goals from these kind of mistakes and we were lucky we didn’t lose this game.”

Arsenal have faced more shots in the opening five games of the new Premier League season than any other club across Europe’s top five divisions – but Leno believes the statistics do not always correspond with reality.

“I don’t know why this is but I think many shots are from distance and when you see Watford, they had many chances but sometimes they were shooting for a throw-in and you can’t count every shot,” he said.

“Thirty-one (shots) is like every three minutes, someone is shooting at our goal. It is a statistic but it is not the truth.

“For example, Deulofeu, he was shooting 15 times from distance and of course there were some dangerous shots but not every one.”

Leno was signed last summer partly because he was highlighted as being comfortable playing out from the back, through his defence.

It is a philosophy employed by manager Unai Emery since his appointment despite initial struggles to adapt to the tactic.

Cleverley revealed after the game that Watford had worked on a plan to take advantage of Leno’s short goal-kicks – but the former Bayer Leverkusen goalkeeper says that the approach will not change.

“That’s our style to play,” he added.

“We try to take the risk because if we beat the press of Watford, then there is a lot of space for our strikers.

“In the first half, we did it very well but in the second we didn’t create too many chances from playing out from the back.

“It is still a process we have to work on. Everybody was angry and disappointed after this game. The manager is a very positive guy.

“He wants to be positive and he said we will analyse this game with time. Now everybody was with emotions, very mad and crazy.

“But that is normal after the game. He said ‘calm down and then on Tuesday we analyse this game and then on Thursday we have another game’.”