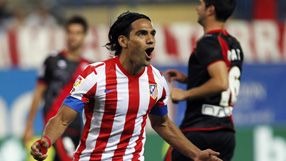 The Colombia international enjoyed a prolific debut season at the Vicente Calderon, firing 36 goals in 49 matches in all competitions last term as Los Rojiblancos won the Europa League title.

Falcao has already hit eight goals in six matches this season to attract the attentions of both Manchester City and Chelsea, and Marin concedes that the club may not be able to keep hold of their prize asset for much longer.

"The €60 million for Falcao would virtually solve all Atletico's economic problems," he told Marca. "[But] for sure, he and all the coaches want him to stay.

"We do our utmost to achieve a miracle. We compete in Europe with more than 50 clubs with a bigger budget. It is difficult to maintain."