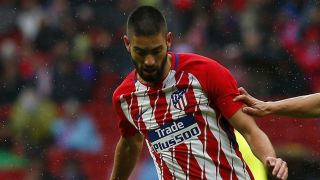 Atletico Madrid completed a 7-0 aggregate triumph over Lledia to reach the last eight of the Copa del Rey with a 3-0 victory at the Wanda Metropolitano on Tuesday.

The LaLiga heavyweights had all but completed their task with a 4-0 win in the fist leg in Catalonia.

But they still named a strong side to face the third-tier outfit, who gave a decent account of themselves against a team featuring Diego Costa and Fernando Torres.

It was Costa, sent off at the weekend for his over-exuberant celebration following his goal in the 2-0 defeat of Getafe, who set up the opening goal.

Lleida fell victim to a counter-attack and Costa laid on the assist for Yannick Carrasco to break the deadlock in the 57th minute.

Substitute Kevin Gameiro made it 2-0 with a simple finish 16 minutes from time and Vitolo rounded off an ultimately comfortable win with a well-taken near-post volley to open his account for the club.

Atletico's attention now turns back to league action and a trip to Eibar, with Diego Simeone's men facing the daunting task of trying to overturn a nine-point deficit to leaders Barcelona.

3 - Diego Costa has been involved in three goals in his first three games in all competitions for : two goals & one assist. Insatiable January 9, 2018

The hosts predictably dominated the early stages and only the frame of the goal prevented them from taking a 16th-minute lead as Lucas Hernandez headed Gabi's corner against the left-hand post and saw his effort on the rebound turned over by Diego Rivas.

Costa headed wide from the consequent corner and, after Fernando Torres diverted a cross over, Costa was denied by Rivas having been put through one-on-one.

Jorge Felix shot into the side-netting from a tight angle with the best chance of the first half for Lleida before Costa spurned another opportunity, again unable to keep a header down.

An excellent first half from Rivas continued as he kept out a low drive from Vitolo at the near post.

Lleida had done well to get men behind the ball but 12 minutes into the second half they were caught on the counter and Carrasco lashed home from Costa's lay-off to finally put the home side ahead.

Augusto Fernandez then powered a long-range effort wide, while Costa and Carrasco were withdrawn shortly after.

Costa's replacement Gameiro had a goal-bound attempt kept out by Rivas, but he was not to be denied a second time, turning in from point-blank range following a run down the byline from Angel Correa.

There was still time for a final flourish from Vitolo, who confidently converted after latching on to an excellent ball over the top from Torres.