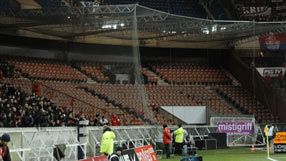 Visiting PSG fans will also be barred for the return fixture in Marseille in March.

The bans were originally imposed last month but Marseille appealed against the decision.

In a letter to the French League (LFP), the interior ministry said the ban "seemed more indispensible than ever... given the current situation" to guarantee public safety.

Long-standing rivalry between the clubs erupted again in October 2009 when fans attacked each other in the streets of Marseille after a match was postponed because of an outbreak of swine flu.

Several arrests were made after police were pelted by supporters.

A supporter was killed following further clashes before the return match last February in Paris.