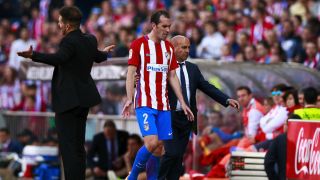 Diego Godin will miss Atletico Madrid's last two LaLiga matches of the season and the first of 2017-18 after being given a three-match ban by the Royal Spanish Football Federation.

The Uruguay international was sent off for two bookable offences in Atletico's 1-0 win over Eibar last week before remonstrating with the referee, linesman and fourth official at Vicente Calderon.

Godin has been given an automatic one-game ban for the dismissal and an additional two-match suspension for using disparaging language towards the matchday officials.

It means he will sit out the last two league games of 2016-17 against Real Betis and Athletic Bilbao and the opening fixture of next term.

Godin is therefore in line to make his final appearance at the Calderon against Real Madrid in Wednesday's Champions League semi-final second leg, with Atleti set to leave the stadium at the end of this season.

Atleti have the right to appeal against the decision, however.