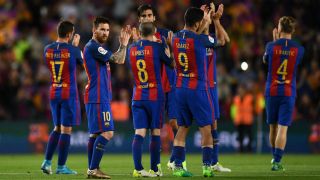 Luis Enrique conceded Barcelona were not consistent enough to win La Liga after surrendering the title to arch-rivals Real Madrid.

Barca came from behind to beat Eibar 4-2, but their victory was immaterial as Madrid claimed a 2-0 win at Malaga to clinch the trophy for the first time since 2012.

The Copa del Rey final on Saturday is now Barca's only chance of success in Luis Enrique's final season in charge, with the Catalan club having been knocked out of the Champions League in the quarter-finals.

Luis Enrique told reporters: "We have recovered fast after a difficult opening few minutes and the truth is we haven't been consistent enough to win LaLiga, especially in our home matches and in the end we have paid the price.

"I think the team has done a lot of good throughout the season but unfortunately the line between defeat and victory is very marginal. I wish we could keep winning title after title but now we have rivals who want the same things and have reached our level."

On Madrid's success, he said: "When you win LaLiga, you are the right winner. We know where we have failed, but that is top competition."

Having won the treble in 2014-15, Luis Enrique's era will be remembered fondly, but he added: "I don't care about [a legacy], I will simply keep the affection that I have received from the players, the club and the fans close to me."

Asked about how his team is better than when he took over, Luis Enrique replied: "Over the course of the three years we have tried to evolve by bringing these players on and continuing to play our football."

Barca will be heavy favourites to lift the Copa del Rey against an Alaves side that finished ninth in La Liga.

But Luis Enrique believes the difficulty they had in seeing off Eibar should be a lesson to avoid complacency.

"We should not forget that Eibar has made things very complicated," he said. "So Alaves can also do it."