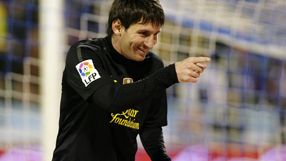 As well as helping the champions put pressure on their arch rivals, whom they host at the Nou Camp later this month, the Argentine became the first player to score 60 goals in a season in European top-flight football in almost 40 years.

The last player to reach the milestone was former Bayern Munich striker Gerd Muller who netted 67 in the 1972/73 season.

"You always suffer after playing a Champions League game midweek," Barca coach Pep Guardiola told a news conference, referring to his side's 3-1 win over AC Milan on Tuesday to clinch a place in the semi-finals of Europe's elite club competition.

"We have 10 games left to finish the season, or theoretically 11 if we get to the Champions League final, and we just need to focus on the next one against Getafe [in La Liga] on Tuesday," added the former Barca and Spain midfielder.

In an action-packed game at the Romareda, in which Zaragoza had to play the second half with 10 men after the dismissal of full-back Abraham Minero, the hosts squandered one chance to lead when Victor Valdes saved Carlos Aranda's 24th-minute penalty.

Barca were struggling to break through some dogged defence and Aranda made amends for his weak effort from the spot with a freakish goal on the half-hour.

Sent clear on the right, his initial effort was saved by Valdes but the ball rebounded back on to the burly forward's bald head before arrowing past Carles Puyol's despairing dive into the net.

A howler by Roberto gifted Barca an equaliser in the 36th minute. The Zaragoza goalkeeper came to collect at a corner but only managed to palm the ball down to Puyol, who volleyed neatly home through a crowd of defenders.

Some tenacious tackling by Alexis Sanchez set up Barca's second when the Chilean thwarted a Zaragoza attack and raced forward before releasing Messi on the left.

The World Player of the Year beat one defender and lashed the ball high into the net.

It was Barca's 159th goal of the season in all competitions, beating the club record of 158 set during coach Pep Guardiola's first season in charge in 2008/09.

Zaragoza were reduced to 10 men when Minero was dismissed for a second yellow card moments before half-time and home coach Manolo Jimenez was sent from the bench two minutes after the break for his over-enthusiastic protests.

Jimenez's tiring troops did well to hang on until five minutes from time when Alexis was upended in the area and Messi drove the spot-kick high past Roberto for his 38th league goal of the campaign, one ahead of Real forward Cristiano Ronaldo.

He then set up Pedro to score Barca's fourth deep into added time as they romped to a ninth straight league success.

"We knew it was going to be a tough game," Puyol said in an interview with Spanish television.