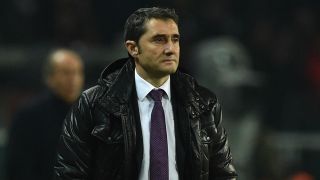 Sunday's thrilling 4-2 win over Eibar was Luis Enrique's final Camp Nou game at the helm, with Barca surrendering the LaLiga title to Real Madrid despite coming from 2-0 down.

He still has next weekend's Copa del Rey final against Alaves to come, but it appears the next incumbent has already been lined up, with Athletic Bilbao coach Ernesto Valverde reported to be the one.

"On Monday 29 May we will announce the new coach," Bartomeu told Barca TV.

"We thank Luis Enrique for the effort he has put in [and] the demands he placed on himself. The door is open. Now we have the Copa."

Following in the footsteps of Andres Iniesta, Bartomeu congratulated Zinedine Zidane's men on their success following a 2-0 triumph over Malaga.

"Obviously we congratulate the champions and our players for the season they have put in," he said, before insisting Lionel Messi – whose two goals took him to 37 in the league this season – would remain at the club.

He added: "There's no doubt that the marriage between Messi and Barca will continue."