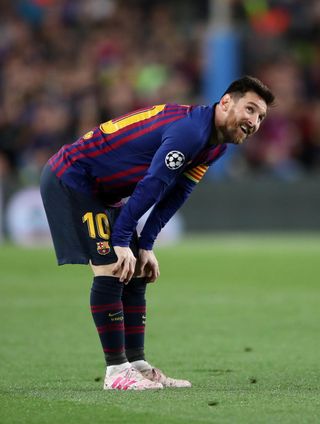 Barcelona manager Quique Setien believes there are problems at clubs all round the world in response to Lionel Messi’s row with Eric Abidal.

Club director Abidal claimed in a Spanish newspaper that a number of Barcelona players were not working hard enough under Ernesto Valverde, who was sacked last month.

But in a lengthy Instagram post, Messi, who played alongside Abidal, took aim at his former team-mate for his comments.

Messi, the six-time Ballon d’Or winner, wrote: “Honestly, I don’t like doing these things but I think that everyone has to be responsible for his acts and take responsibility for their own decisions.

“The players [are responsible for] what happens on the pitch, and we have been the first to recognise when we were not good. The people in the sporting directorate should also assume their responsibility and above all take ownership of the decisions they make.

“Finally, I think that when players are talked about, names should be given because, if not, we are all being dirtied and it feeds comments that are made and are not true.”

The row between Messi and Abidal has cast a cloud over the Spanish giants, who trail La Liga leaders’ Real Madrid by three points.

But speaking ahead of his side’s clash against Athletic Bilbao in the Copa del Rey on Thursday, Setien, who replaced Valverde, said: “I will focus on what I have to focus on, and that is football. As for everything else I am truly not interested.

“I know that there are problems in all clubs around the world, for sure. But there are things I will never be able to control so I need to focus on what I can focus on.

“Talk to me about football, please. I want to go to training, prepare well for the game and focus on things I need to focus on. Everything else doesn’t help me to do my job.”

🗣 @QSetien reveals what he is 'truly focused on' … pic.twitter.com/7BTcdZpkKY— FC Barcelona (@FCBarcelona) February 5, 2020

Setien was dealt a huge injury blow on Tuesday when it was confirmed that Ousmane Dembele has been ruled out for the remainder of the season.

The France international, 22, suffered a hamstring tear on his return to training, having been sidelined since November with a thigh problem.

Setien added: “I am worried not about Dembele as a footballer, but more Dembele the person. He is an extraordinary kid, and he worked with intensity and desire to come back.

“I am very sad for him because he is going to be sidelined for four to five months without football which is what he likes the most. That is what really hurts me.”

Barcelona will be overwhelming favourites to win the quarter-final tie against a Bilbao side that has failed to win in their last seven league matches.

But 38-year-old striker Aritz Aduriz, now in his third spell with the club, said: “It’s a wonderful challenge. When you play football, you dream of having this kind of matches.

“I hope we can have a memorable night at San Mames. One always dreams about that.”