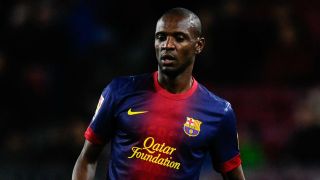 Abidal, who represented LaLiga's champions between 2007 and 2013 and is now the club's technical secretary, underwent a transplant in 2012 after the discovery of a tumour on his liver.

Spanish press on Wednesday alleged that Rosell, who was arrested in 2017 as part of a money-laundering investigation, purchased the organ.

Barca have rejected claims of any wrongdoing, while the allegations have also been denied by Abidal and the Hospital Clinic de Barcelona, where the former France international underwent the procedure.

"In light of stories published in relation to the liver transplant received by the club's former player and current technical secretary, Eric Abidal, FC Barcelona roundly deny any irregularity in the matter, as have Abidal and the Hospital Clinic de Barcelona facility," a statement from the club read.

"The stories omit an important fact, as this case was closed by a Barcelona court on May 18th. This omission has caused damage to the reputation of Eric Abidal, all of the organisations involved in the transplant procedures, FC Barcelona and former club president Sandro Rosell.

"The club are saddened by the lack of rigour in the spreading of such information about such a sensitive issue, and reaffirm our commitment to Eric Abidal and his foundation to help improve the lives of children and young people affected by similar medical treatments."

Last week, a Spanish court ruled that Rosell will stand trial on charges of money laundering, in relation to the sale of television rights for Brazil matches, for which he remains in custody.

His lawyer, Pau Molins, rejected the claims relating to Abidal's transplant, and questioned the timing of the latest allegations against his client.

Speaking to RAC, as reported by Marca, he said: "It suits them to paint Sandro Rosell as a beast.

"We don't know anything about this report, but it annoys me that it is coming out one year after he has been imprisoned and as he waits for trial.

"The conversation that has come out has absolutely nothing to do with the [other] case," Molins said.

"I think they don't want to go to trial so they are bringing out things to see how to buy time and how to hide, because they don't know what to do with Rosell in prison."