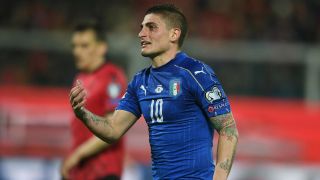 Nicolo Barella has won his first call-up to the Italy squad following an injury to Marco Verratti.

The Paris Saint-Germain midfielder played 79 minutes of his side's 6-2 Ligue 1 thrashing of Bordeaux on Saturday, before picking up an unspecified problem.

Cagliari's 20-year-old Barella has been drafted into the squad in his stead for Italy's final two World Cup qualifying matches next week.

Roberto Inglese of Chievo has also been added to Gian Piero Ventura's plans after Andrea Belotti had to be taken off on a stretcher during Torino's 2-2 Serie A draw with Verona.

Belotti is to undergo further tests on Monday before a decision is made on whether he will stay with the squad.

Italy sit second in Group G, three points behind leaders Spain, heading into their matches against Macedonia in Turin and Albania in Tirana.

They need only one point from those games to guarantee a spot in a two-legged play-off for qualification for next year's finals.