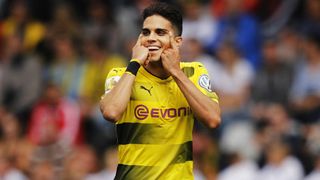 Dortmund confirmed on Tuesday that the Spain international centre-back had returned to La Liga to join Betis, where he has signed a five-and-a-half-year deal.

The transfer comes after a difficult few months in Germany for the former Barcelona man, who was injured in the bomb attack on the Dortmund team bus last April.

"I have no words to describe the moments and feelings that I have lived in only a year and a half," he said in a statement released via his Twitter account.

"It has happened very fast but at the same time I feel like I had been [here] many more years. Everything has been very powerful and I have experienced amazing feelings, inside and offside [sic] the field.

"Thanks to my colleagues who welcomed me and gave me their love from the first to the last day. Thanks to the trainers who trust on [sic] me.

"Above all, millions of thanks to you, supporters. I would never have imagined feeling so much love... you are an example to everyone.

"I gave everything in every moment and we were able to achieve and celebrate a trophy together [last season's DFB-Pokal]."

Thank you BVB family! I have no words to describe the moments and feelings that I have lived in Dortmund with you and I will never forget it. Danke für alles Borussen! January 30, 2018

Bartra suffered damage to his wrist when Dortmund's bus was hit by a roadside bomb ahead of a Champions League quarter-final clash with Monaco.

The 27-year-old testified in court this week, at the trial of the man suspected of carrying out the attack.

In light of that incident and the fact Bartra has only made nine starts in the Bundesliga this season, Dortmund suggested they agreed to a substantially reduced transfer fee to allow the player to return home.

"Marc Bartra is a wonderful person and a great footballer who immediately won our hearts," said CEO Hans-Joachim Watzke, via the club's website.

"Unfortunately, terrible things have happened to him in Dortmund due to the cowardly attack. Against this backdrop, we respect Marc's desire to return to his homeland.

"Because we feel committed to Marc in a special way, we have made a significant concession in the transfer negotiations.

"Borussia Dortmund wishes Marc and his family all the best for the future."