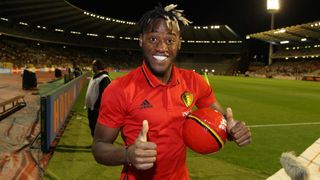 Michy Batshuayi's eagerness to earn a place in Belgium's squad for the World Cup is encouraging for Borussia Dortmund, head coach Peter Stoger has said.

The striker moved to Signal Iduna Park on loan on transfer deadline day to replace Pierre-Emerick Aubameyang, who joined Arsenal in a £56million deal.

The Gunners allowed Olivier Giroud to move to Chelsea after landing Aubameyang for a club-record fee, prompting Batshuayi to head to the Bundesliga in pursuit of regular first-team football.

Stoger plans to include the 24-year-old in Dortmund's squad for Friday's clash with Cologne and hopes he hits the ground running as he attempts to force his way into Roberto Martinez's plans for the World Cup in Russia.

"It's up to us how quickly we put him into the system. Michy will certainly be in the squad," said Stoger.

"He's hungry and motivated and he wants to go to the World Cup, so that's good news for us.

"He's hard-working and dangerous in the penalty area. He had a good record at Chelsea and I think he fits in well with us."

Stoger wants the departure of Aubameyang, after weeks of speculation and reported concerns about the striker's behaviour, to allow Dortmund to place their sole focus on finishing the season strongly.

"We're focused on our upcoming challenges," he said. "Our quality is very high, even after Aubameyang's departure.

"We can finally have some quiet in the camp. We can carry on aiming for our goals for this season."

Dortmund are sixth in the Bundesliga, but just two points behind Eintracht Frankfurt in fourth.