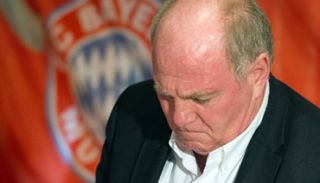 Hoeness shocked Germany last month when he said he had voluntarily alerted tax authorities in January to a Swiss bank account he held, throwing the former West Germany international's future into doubt.

He is now under investigation for suspected tax evasion and, if convicted, he could be sentenced to jail. The admission, which also has political ramifications, came just as Bayern regained the Bundesliga crown from Borussia Dortmund.

Bayern said they had turned down an offer from 1974 World Cup winner Hoeness to step back from his role but would keep an eye on the situation.

"In the interest of Bayern Munich... the board of directors has, after an intensive discussion, decided that Uli Hoeness should continue to carry out his role as the Bayern Munich club president," the club said in a statement on their website.

Bayern added that the club "should concentrate fully and entirely on achieving the sporting goals in the Champions League final on May 25 and the German Cup final on June 1."

"Uli Hoeness has expressed his regret to the club over the case and apologised," the club said.

"The board of directors will continue to observe the situation and deal with any new findings on the topic."

Bayern are enjoying one of their best-ever seasons on the pitch. They have won the Bundesliga, face German rivals Borussia Dortmund in the Champions League final in London on May 25 after outclassing Barcelona in the semi-finals and play VfB Stuttgart in the German Cup final.

They also pulled off a spectacular managerial coup in January by hiring former Barcelona coach Pep Guardiola who will take over from Jupp Heynckes next season.

Hoeness, 61, had been an eminent figure in Germany, both for his managerial prowess in building Bayern Munich into one of the world's most successful football clubs and his straight-talking views on politics and business which made him a popular guest on talk shows and in the chancellery.

Hoeness, who became Bayern's general manager in 1979 at the age of 27 after a knee injury ended his playing career, has close ties to Chancellor Angela Merkel and her Christian Democratic party and the situation has hurt both in an election year.

Merkel has distanced herself from Hoeness amid criticism from the opposition Social Democrats (SPD) and Greens that her government has been too lenient on tax cheats.

He has also been a stern critic of FIFA president Sepp Blatter, saying last year that the Swiss should be "deposed" if he failed to clean up football's governing body.

"I made a foolish mistake, a giant blunder that I'm trying to correct as best as I possibly can," Hoeness told the online edition of Die Zeit weekly last week.