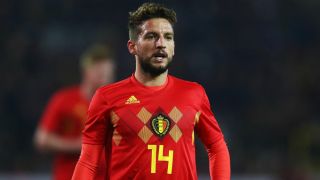 Dries Mertens believes star-studded Belgium are among the favourites to win the World Cup as Roberto Martinez's men prepare to get underway in Russia.

This is seen as the last chance for Belgium's golden generation to taste success, having reached the World Cup quarter-finals in 2014 and the same stage at Euro 2016.

Reigning world champions Germany, Brazil, Spain and France are favourites to take out the showpiece tournament, but Napoli forward Mertens said Belgium's experience has them in good stead to challenge.

"The whole team wants to do better after the Euros. There is a lot of desire," Mertens told reporters on Saturday after Belgium arrived in Sochi two days before their match.

"Everyone is very concentrated and everyone is very eager. We know the strength of our group. If it was our first World Cup, I would say we would lack experience. But this is our third appearance in a big event with the majority of the group.

"It allows us to say that we are part of the favourites."

Belgium will be missing a couple of key players when they take on Panama at Fisht Stadium after captain Vincent Kompany and fellow defender Thomas Vermaelen were ruled out.

Kompany has been nursing a groin injury, though Martinez is hopeful of having the Manchester City skipper back for the clash with England on June 28, while Laurent Ciman was sent home though he remains on standby.

It will be a huge occasion for newcomers Panama, who stopped the United States from qualifying for the World Cup in dramatic scenes in CONCACAF.

But the minnows will be soaking it in as they prepare to introduce themselves to the world in Sochi.

"It was a pleasant and dreamful travel to where our debut is going to take place," midfielder Valentin Pimentel said as Panama arrived in the city. "The affection in the fans' welcome was spectacular and we hope to compensate it by doing what we like - which is playing football and demonstrating that Panama is capable of doing great things."

It was not the best of seasons for Hazard and Chelsea. There were flashes of brilliance but like Chelsea – who surrendered their Premier League crown to Manchester City – Hazard was inconsistent. However, the Belgium star has the opportunity to regain his best form in the pursuit of glory in Russia.

The hulking defender is the face of Panama and their captain. One of the region's most feared and experienced centre-backs, Torres – whose last-gasp goal saw Panama through to the World Cup – is a threat at set-pieces, while the Central Americans will be relying on the 32-year-old to stop Lukaku.

- This will be the first ever encounter between Belgium and Panama.

- Belgium are unbeaten in their last nine World Cup group games, winning each of their last four.

- Panama made it to the World Cup with a negative goal difference (minus one), winning only three of their 10 games in the final round of qualifying.

- Roberto Martinez is the first non-Belgian manager to lead the Red Devils at a major tournament since Scot Doug Livingston in 1954.

- Panama boss Hernan Dario Gomez is set for his third World Cup with a third different team, having led Colombia (1998) and Ecuador (2002) previously.