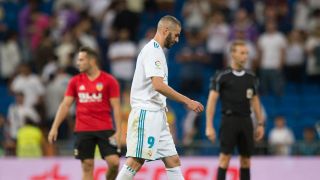 Karim Benzema has no interest in leaving Real Madrid because he considers Los Blancos to be "the best club in the world".

The French striker is currently sidelined with a hamstring injury and is not expected to return before October, yet he does not believe there to be any threat to his place in the Zinedine Zidane's starting line-up.

Madrid allowed Alvaro Morata to depart for Chelsea during the transfer window, leaving them particularly thin in the central attacking role, meaning even less competition for Benzema.

And the 29-year-old is confident he will stay at the Santiago Bernabeu for the foreseeable future.

"It is the best club in the world," he told BeIn Sport France. "It is a pleasure and makes me proud.

"The expectations are very big and every season you start from scratch. You have to work to keep yourself at the highest level.

"If you are a starter here, you do not need to go elsewhere. I think we are in one of the best stages of Real Madrid's history.

"The team is very strong, it's not just a matter of those who are usually the starters; the substitutes also make a difference."

He added: "I will not say I was surprised, because he does what he wants, although it seemed strange. He will have his reasons, no doubt."