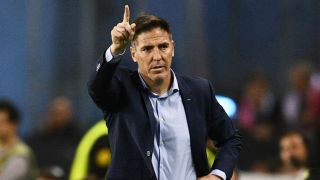 Eduardo Berizzo felt Celta Vigo's performance at Old Trafford was superior to Manchester United's display in the first leg and meant they deserved a place in the Europa League final.

United were fortunate to reach the Stockholm showpiece in their bid for Champions League qualification next season after playing out a 1-1 draw in Thursday's semi-final second leg, in which Eric Bailly and Facundo Roncaglia saw red late on.

Jose Mourinho's men led 1-0 following last week's trip to Balaidos and they looked set to ease into the final after Marouane Fellaini struck early at the Theatre of Dreams but Celta were a threat throughout and Roncaglia equalised five minutes from time to trigger a tense finale.

After Bailly and Roncaglia were sent off following a mass confrontation, John Guidetti had a golden opportunity to sink United and secure Celta's spot against Ajax on May 24 but the former Manchester City forward fluffed his effort at the death, allowing the English hosts to scrape through 2-1 on aggregate.

"It was a great opportunity as it was right at the end but we created half-chances right throughout the game," coach Berizzo said of Guidetti's last-gasp chance.

"We played really well and reduced them to one chance, from which they scored. We had a lot of possession, played exactly as we wanted to play. With all the effort we put in, it was a great shame not to reach the final.

"Football's full of drama. You learn from defeats and turn them into victories down the line.

"I couldn't be more proud of my players. They covered every blade of grass and the connection they made with the fans who travelled from Galicia, I'm proud of all that.

"I think, when you analyse it in the cold light of day, it will confirm what I thought about my team all season. We were brave and we fought to the end and I'm proud of them.

"We performed much better here than United did in the first leg. It's a good way to compare the performances. Given that, we perhaps deserved to go through.

"I'm gratified by many things I saw. The fact that we played better here than they did in Balaidos gives us the advantage in overall performance.

"We left everything out there. We couldn't have played any better, I don't think. Given the huge gap on every level between the two clubs, I think with our fight and spirit we managed to bridge that gap.

"Even through the bitterness of defeat, when you settle down then you learn from the bad experience of defeat."