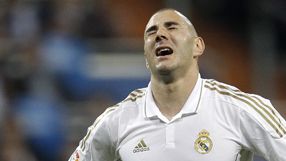 Goalkeeper Vicente Guaita was the hero for the visitors in a tense encounter at the Bernabeu as he produced a string of superb saves to frustrate Cristiano Ronaldo, Angel di Maria and Karim Benzema.

Real, who play Barca at the Nou Camp later this month, have 79 points from 31 matches, with Barca on 75 after Saturday's 4-1 win at Real Zaragoza and Valencia in third on 49.

Champions Barca, chasing a fourth straight title, can cut the gap to one point with a win at home to Getafe on Tuesday, with Real not playing at Atletico Madrid until Wednesday.

Jose Mourinho's Real side had a 10-point lead over their arch rivals three weeks ago but slipped to consecutive draws against Malaga and Villarreal and were held again on Sunday by a spirited and well-organised Valencia side.

Ronaldo struck a fierce drive against the post in the eighth minute and was again denied by an upright with a deflected effort 11 minutes into the second half.

Valencia had chances too and a 25th-minute Ricardo Costa header and a powerful Tino Costa shot from long range in the 55th also struck the frame of the goal before Iker Casillas brilliantly denied Jordi Alba with just over five minutes left.

Real poured players forward in the final minutes but could not find a way past an inspired Guaita and now need to regroup for the potentially tricky clash at Atletico.

It was their first goalless draw at the Bernabeu in more than five years.

"We still have the advantage and we have to keep going," Real midfielder Xabi Alonso said in a television interview.

"Every point is fundamental now and we are focused on our next game," he added.

In the earlier kick-off, Levante climbed above Malaga into fourth and a Champions League qualification slot after Valdo and Arouna Kone struck early in a 2-0 victory at home to Atletico.

The Valencia-based club, this season's surprise package despite a meagre budget and ageing squad, have 48 points, one behind their more glamourous city rivals.

Atletico have enjoyed a revival since coach Diego Simeone took over at the turn of the year and are through to the semi-finals of the Europa League.

However, their domestic form has been erratic and they are six points behind Levante in seventh and in danger of missing their goal of a lucrative Champions League spot next season.

They had defender Miranda sent off late on when he earned a second yellow card and the Brazilian will be suspended for Wednesday's game against Real.

Athletic Bilbao ended a run of four defeats and a draw when Fernando Llorente's 47th-minute header gave them a 1-0 win at home to Sevilla that lifted the Basque club to 11th.

In a congested middle section of the table, only six points separate Osasuna in sixth on 43 and Real Sociedad in 15th on 37.