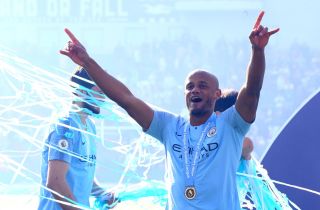 Manchester City midfielder Kevin De Bruyne and youngster Phil Foden were among those to pay tribute to Vincent Kompany after the Belgian called time on his career at the club.

Kompany helped City to 10 trophies, including this year’s domestic treble, during 11 years and 360 games at the club.

The 33-year-old has been appointed as play-manager of Belgian side Anderlecht, a club he joined at the age of six.

Playing for about 10 years with this man for club and country. And what an privilege it’s been. Big player, Big personality and big leader. Learned a lot from you. Wishing you all the best for the future. Btw picking you up at 2 pm today💯🤷🏼‍♂️🍾 pic.twitter.com/RWjIhAkUel— Kevin De Bruyne (@DeBruyneKev) May 19, 2019

Fellow Belgian De Bruyne was among those to take to Twitter to express their feelings.

He wrote: “Playing for about 10 years with this man for club and country. And what a privilege it’s been.

“Big player, big personality and big leader. Learned a lot from you. Wishing you all the best for the future.”

Kompany signed off his City career with a second FA Cup trophy on Saturday, where City thrashed Watford 6-0 to complete the treble.

Young midfielder Foden said his former team-mate had “looked after him from day one”.

Looked after me from day one. Led by example, showed everyone what it means to be a leader, wear their heart on the sleeve, and give everything for this club.— Phil Foden (@PhilFoden) May 19, 2019

Thank you for this years close to you. Thank you for all the moments, all the words to me and to be the best leader which need this big family. You are a legend and we wish you the best in your next stage, @VincentKompany !©️🦈💙 pic.twitter.com/un2bJdRFsM— Aymeric Laporte (@Laporte) May 19, 2019

From skip to gaffer, the man has it all!! Since I walked through the door Vinny has been amazing to me. He helped me settle in and I’ve learned a lot from the big man. Good luck with everything skip, you’ll be missed #CaptainFantastic#Legendpic.twitter.com/KWqpCWZsXE— Kyle Walker (@kylewalker2) May 19, 2019

Kompany scored 20 goals during his 360 games, and won four Premier League titles and even those from other clubs praised the centre-back, including former Manchester United defender Gary Neville, ex-Liverpool striker Michael Owen and Match of the Day presenter Gary Lineker.

Neville admitted he wished Kompany had played for his club and said his influence on and off the pitch was “huge”.

I didn’t expect that. Their are some players you wish played for your club. @VincentKompany was one of them. A great centre back whose influence on and off the pitch was huge. https://t.co/5hfP1ceNUp— Gary Neville (@GNev2) May 19, 2019

No question that the mightily impressive captain of @ManCity has played a big part in building a Club that looks close to unstoppable. Take a bow @VincentKompany— michael owen (@themichaelowen) May 19, 2019

Good luck to you, @VincentKompany with your new challenge. One of the greatest players, leaders and role models to have played on the green carpets of this country. And what a way to bow out from @ManCity 👏👏👏 https://t.co/ZE1IOywid7— Gary Lineker (@GaryLineker) May 19, 2019