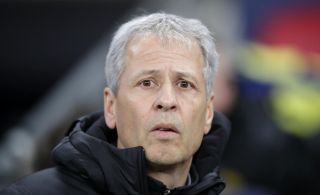 BVB have won each of their past eight league meetings with the Foals but Favre knows they will have to be at their best to extend that run to nine.

“Gladbach are a dangerous team who play attractive football,” said Favre at his pre-match press conference.

“They’re very strong when it comes to counter-pressing and they have a lot of power going forward. Good work has been done there for some time. We absolutely want to win on Saturday.”

Dortmund have been boosted by the news that Portugal wideman Raphael Guerreiro has extended his contract until June 2023.

Nico Schulz is likely to return to the squad but Lukasz Piszczek has a muscle tear and Paco Alcacer is out with an Achilles tendon injury.

“Nico has trained fully, but Lukasz Piszczek has not yet taken part in team training sessions. As for Paco Alcacer, he is not quite yet ready to return,” added Favre.

Mario Gotze is expected to lead the line in Alcacer’s absence, while Thorgan Hazard is set to face his former club for the first time.

Gladbach have injury worries at the back with Matthias Ginter out and Stefan Lainer facing a late fitness test.

USA international Fabian Johnson is also out with a groin problem but club captain Lars Stindl is in contention to feature for the first time this season.

“Lars is now an option for us again and he will be in the squad for Saturday’s game,” head coach Marco Rose said at his press conference.

“He is a very important player for us both on and off the pitch. He has been sidelined by injury for a long time and we want to integrate him back into the team gradually.

“He hasn’t played yet this season so he’s obviously not at 100 per cent, but we’re glad that he’s finally back.”