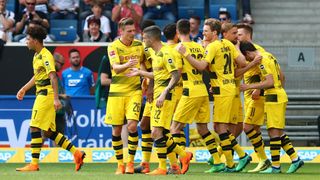 Lucien Favre will face an immediate test of his credentials at Borussia Dortmund after they were handed a home game against RB Leipzig at the start of the 2018-19 Bundesliga season.

Favre, the successor to Peter Stoger as head coach at Signal Iduna Park, discovered his side's provisional schedule when the fixtures for the new campaign were released on Friday.

The tricky opener against Leipzig will be followed by matches against Hannover, Eintracht Frankfurt and Hoffenheim.

Dortmund's first meeting with Bayern Munich will come at home on matchday 11 in November, while they visit rivals Schalke in early December with the return fixture slated for the end of April.

Should he still be in charge by the end of the campaign, Favre will come up against former club Borussia Monchengladbach on the final week of the season.

Here are Borussia Dortmund's 2018-19 fixtures in full. All dates are to be confirmed once televised schedules are decided.