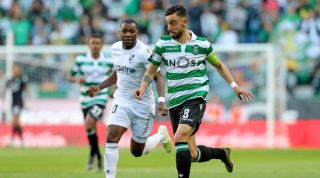 The Telegraph reports that Miguel Pinho spoke with Spurs representatives in London on Wednesday.

Fernandes has been strongly linked with a move to north London, but Tottenham are also interested in Real Betis midfielder Giovani Lo Celso as they prepare for the possible exit of Christian Eriksen.

The Sporting star, who scored 20 league goals during the 2018/19 season, has also attracted interest from United, who met Pinho around two months ago to discuss a possible move.

Aaron Wan-Bissaka of Crystal Palace is understood to be the Old Trafford club’s priority at this point, but they might have to take action sooner than they would’ve liked as Spurs make progress.

The report claims that United officials told Fernandes’ team during their meeting that they wanted more time as they looked to sign a right-back, asking to be kept updated about the Portugal international’s situation.

Sporting are likely to encourage a bidding war between the two Premier League clubs and although they have set an ambitious asking price of £70 million, Fernandes is more likely to be sold at around £45 million.