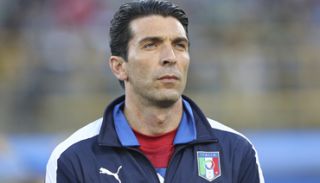 Italy lead Group B by three points after four wins in five games but with the Confederations Cup on the horizon, Buffon wants minds to be focused on the clash against the third-placed Czechs.

"We are enjoying qualification for the World Cup in a serene manner, up to now there haven't been any nasty surprises partly because of how we have played," he told reporters.

"The Czechs are one of those teams you have to go out and beat because they don't give you anything.

"You play a below-par game then you risk losing, if you play only normally then you might be able to grab a point but we want to play a great game to increase our lead at the top of the group."

Buffon's wife is Czech and the keeper shared his sympathies with those affected by floods in Prague.

"They are experiencing a real drama," he said.

Italy head to Brazil for the Confederations Cup on Sunday where they first face Mexico in Group A on June 16 in Rio de Janeiro.