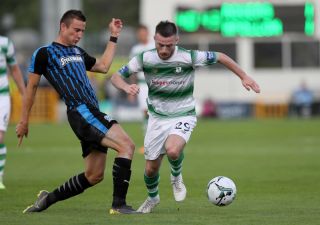 Jack Byrne admits it is “crazy” to even contemplate making his senior Republic of Ireland debut as he attempts to fulfil the promise which once prompted Manchester City to snap him up.

The 23-year-old Shamrock Rovers midfielder could win his first cap in Tuesday night’s friendly against Bulgaria.

That would represent a significant step in the career of a man who has been destined for big things from an early age – he was identified by Manchester City as a rare talent as a 14-year-old – but whose career path has taken him back to his native country after a testing spell in England.

Byrne, whose natural talent prompted McCarthy’s predecessor Martin O’Neill to invite him to train with the senior squad, admitted his potential elevation was difficult to countenance.

He said: “It’s crazy to think that you’re involved in the squad and you could maybe step on the pitch. It’s mad even thinking about it and I’m trying not to think about it too much because you never know when the day comes if you’re going to play or not.

“I’m just trying to think about training and doing well and hopefully I do enough to hopefully get a few minutes.

“But if not, it’s still been an unbelievable experience.”

Byrne’s trajectory appeared to be heading in the right direction when he was sent out on loan to Dutch side Cambuur for the 2015-16 season by City and returned with his reputation enhanced.

However, a less successful and ultimately truncated spell at Blackburn was followed by a permanent move to Wigan, which turned sour after Warren Joyce, the manager who had signed him on a three and a half-year contract, was sacked just weeks later.

Oldham and Kilmarnock were added to his curriculum vitae before he opted to head back across the Irish Sea in December last year, and his contribution to date this season has helped Rovers maintain a pursuit of runaway SSE Airtricity League leaders Dundalk and reach the second qualifying round for the Europa League.

Byrne said: “I feel as if I played good football wherever I’ve been. Sometimes my face didn’t fit in certain places. That’s fine, that’s football. You move on and take it on the chin, dust yourself down and go again.”

Happiness on the pitch is a major factor in Byrne’s vein of form and he admits that has improved markedly since his return home.

He said: “I never really had off-the-field issues. It was more boredom and trying to fill time. It’s a lot easier when you’re at home and you’re around your family. You kill time better. It’s just easier to fill the days now.

“Things are going well and I think it’s showing on the pitch.”