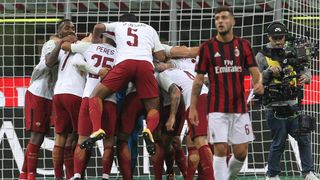 Inter and Milan have taken a back seat to rivals Juventus, who are seeking a seventh successive Scudetto this term, but both clubs are hopeful of returning to the top of Italian football.

New Chinese owners have renewed faith among Inter and Milan supporters, with the former level on points alongside second-placed Juve, while the Rossoneri are seventh amid an underwhelming start to the season.

Cannavaro insisted patience is required as Inter and Milan bid to get back to the Serie A summit.

"They have financial resources and they will always be fighting for the biggest objectives," Tianjin Quanjian head coach Cannavaro told Premium Sport.

"But it will need time in order for them to organise themselves.

"Napoli, for example, have arrived at their level after 10-12 years."