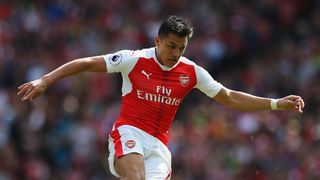 Along with an incessant soundtrack of disquiet over manager Arsene Wenger's unresolved future, speculation over Sanchez and Ozil's next move has persisted during the closing weeks of the season.

Both players are out of contract in 2018 and extended terms remain unsigned.

"Alexis has been brilliant, scoring a lot of goals," Cech, who is set to line up against former club Chelsea in the FA Cup final on Saturday, told reporters.

"That's the main thing is we need to keep the team together and try to strengthen it in the areas where the manager would like to, and then we will be ready to go again."

Arsenal beat Everton 3-1 on the final day of the Premier League season but finished outside the top four for the first time under Wenger.

Cech does not feel this should unduly derail the Gunners, pointing to the example of Chelsea being crowned champions despite their title defence in 2015-16 ending with them in 10th position.

"If you have one off year in 20 years, it's not a problem," he said. "I think the club has a strong foundation, strong organisation and everything to be out for one year and come back straight in, like Chelsea did last season.

"I think it helped them not to be involved [in Europe] this season, because they could keep all their energy for the league."