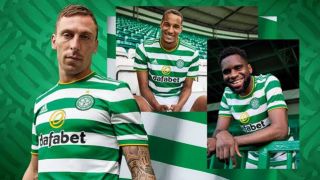 Adidas has revealed the new Celtic kit for the coming season – and it's sure to go down well with fans. The German sportswear giants replaced New Balance at the end of last season, and will produce the famous green and white-hooped jersey for the next five campaigns.

The official release describes the new kit as a "crisp, clean and classic" and it's hard to argue with that. The familiar green and white hoops adorn the chest, but are now accompanied by the three Adidas stripes down the sleeves. As ever, a gold star, commemorating Celtic's achievement as the first British club to win the European cup (in 1967), twinkles on the breast.

A moisture-absorbing fabric ensures players can keep cool during fiery fixtures, while a crew-neck collar keeps things classy up top.

You can pre-order the kit today, ahead of the official launch on August 6, meaning you'll get yours in the post the day it's released.

The kit could be an extra special piece of memorabilia for Celtic fans, as the club seek to make it 10 straight league titles in the coming season.