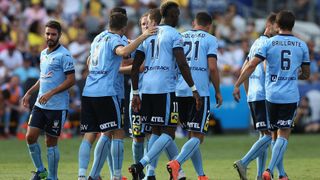 Sydney FC extended their unbeaten run to start the A-League season to 14 matches with a thrilling 3-2 victory over Central Coast Mariners.

Brazilian striker Bobo scored a brace either side of half-time in Gosford on Sunday to put Sydney in a seemingly comfortable 2-0 lead, only for the Mariners to fight back through Roy O'Donovan and Scott Galloway.

Fabio Ferreira also missed a penalty for the home side between those goals and that ultimately proved costly as David Carney headed home Sydney's winner - which appeared to be offside - in the 77th minute.

With their win, Sydney are seven-points clear of Melbourne Victory atop the table, while the Mariners remain second-bottom.

The visitors looked the more likely to score from the outset, but they had to wait until the 43rd minute to make the breakthrough.

Filip Holosko flicked on a header and Bobo took a touch before firing past a helpless Paul Izzo from inside the area.

The striker's second goal was far simpler, the in-form Milos Ninkovic doing the hard work before poking a pass for Bobo to strike into an empty net.

O'Donovan halved the arrears in the 66th minute before Connor Pain won a penalty after being brought down by Rhyan Grant in the area, but Ferreira put his spot-kick well over the bar.

Undeterred, Central Coast continued to push for equaliser and Galloway duly scrambled home to make it 2-2 in the 76th minute.

Parity lasted just a minute, however, before Carney headed in a Michael Zullo cross from the left and the goal stood despite the suspicions of offside.