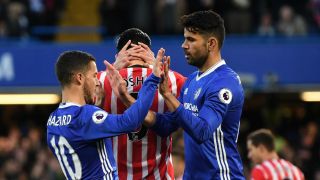 Chelsea extended their lead over Tottenham at the top of the Premier League to seven points as Diego Costa ended his recent goal drought with a double to cap a 4-2 win over Southampton.

Antonio Conte voiced dissatisfaction over his team being back in action three days on from the 4-2 FA Cup semi-final win over Spurs and Claude Puel's Saints were sure to ask plenty of questions of them despite falling behind early to Eden Hazard's 17th goal of the season.

Puel had compared midfielder Oriol Romeu to PFA Player of the Year N'Golo Kante in the build-up to the match and the former Chelsea player claimed a rare goal when he equalised in the 25th minute.

A gripping match remained in the balance until Gary Cahill – back having missed out on Saturday due to illness – headed home in first-half stoppage time and Costa's own aerial prowess came to the fore eight minutes into the second half.

The Spain striker's 50th in the Premier League goal was his first in eight matches and he duly made it 20 across all competitions this season with a late second of the night. A neat Ryan Bertrand header deep into stoppage time was scant consolation for Saints.

On Wednesday, Tottenham travel to face a Crystal Palace side whose win at Stamford Bridge earlier this month did much to reopen a title race that Conte will hope results such as this wrap up swiftly.

Jack Stephens volleyed tamely at Thibaut Courtois following a cleverly worked Southampton free-kick, after which Conte's men showed their ruthlessness by breaking up field for a fifth-minute opener.

Cesc Fabregas – starting ahead of compatriot Pedro – slid a pass towards the area to leave Southampton defender Maya Yoshida isolated up against Costa, who cut the ball back for Hazard to fire unerringly across Fraser Forster and into the bottom left corner.

Southampton regrouped effectively and a familiar face at Stamford Bridge grabbed their reward.

James Ward-Prowse's left-wing corner skimmed off Cesar Azpilicueta to drop for Manolo Gabbiadini beyond the far post, sewing panic in the Chelsea backline and the Italy international's deflected pass was prodded home by Romeu.

The hosts were evidently rattled, Sofiane Boufal and Bertrand's raids down their right a particular concern, before Kante unfurled a lesser-spotted side of his game – a twinkle-toed run into the Southampton box to shoot across goal.

Puel's side failed to fully clear the danger, Costa had a penalty claim rejected as he went down with Steven Davis at close quarters and Nemanja Matic forced Forster to save as he tried to repeat his Wembley heroics.

Boufal fired into the side-netting as a gripping end-to-end feel remained until Kante's raking ball back into the Southampton box was won by Marcos Alonso and headed in by Cahill in the face of Costa's overhead-kick attempt.

Southampton were out first for the second half and clearly intent on making amends for the setback, but a physical mismatch allowed Costa to put daylight between the sides.

Fabregas floated the ball towards the far post after his initial corner was blocked and Chelsea's top scorer manhandled and outmuscled Bertrand before steering past Forster.

Southampton playmaker Dusan Tadic forced Courtois to save sharply before the hour and Conte, typically buoyant when Costa netted, was kicking at his technical area when Yoshida and Gabbiadini again went close from a poorly defended corner.

Set-piece woes were again to the fore as Davis had a drive deflected wide and Conte will want such kinks ironed out before the weekend trip to Everton.

Nevertheless, Chelsea took another significant step to glory that was almost fittingly capped by man-of-the-moment Kante, who forced Forster to save late on.

Set-piece woes were again to the fore as Davis had a drive deflected wide and Conte sent on John Terry to a rapturous reception in an attempt to restore on-field calm.

Costa exchanged passes with Hazard and substitute Pedro to net a swaggering fourth as the hosts moved towards glory in style – although weekend opponents Everton will have seen reasons for encouragement in the sloppy defending that allowed Bertrand, like Romeu a former Chelsea player, to reduce the arrears from Cedric Soares' cross.