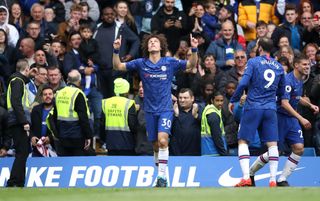 Chelsea are on the brink of securing qualification for next season’s Champions League after their 3-0 victory at home to Watford.

The Blues took advantage of Tottenham’s surprise defeat at Bournemouth to move up to third in the Premier League. They will remain there if they win their final league fixture at Leicester next Sunday.

It may even transpire that a draw will prove enough to secure their latest top-four finish – widely considered the minimum objective for the division’s six highest-placed teams – and that there will be wider consequences that include the pressure easing on manager Maurizio Sarri.

For the opening 45 minutes at Stamford Bridge, Chelsea appeared tired and again lacking in inspiration, but Ruben Loftus-Cheek’s goal three minutes into the second half lifted them, contributing to further finishes from David Luiz and Gonzalo Higuain that secured all three points.

Sarri had made four changes to the team that drew 1-1 in the Europa League away to Eintracht Frankfurt on Thursday, although he perhaps should have considered more given the extent to which they had previously struggled for intensity.

Eden Hazard was among those recalled, alongside Marcos Alonso, Mateo Kovacic and Higuain at the expense of Willian, Emerson, Loftus-Cheek and Olivier Giroud – but the hosts’ biggest frustrations again came in the final third.

Perfectly weighted pass from @_Pedro17_ to find @G_Higuain who coolly chips it over Foster and in! 👌— Chelsea FC (@ChelseaFC) May 5, 2019

It did little to hinder their cause that N’Golo Kante, normally so energetic, had to be substituted in only the ninth minute, replaced by Loftus-Cheek, because of a suspected hamstring injury. But by then the visitors had also already threatened twice on goal.

Gerard Deulofeu had struck wide of the right post after turning away from Jorginho on the edge of the penalty area and Deeney then forced the finest of saves from the diving, stretching Kepa Arrizabalaga when he headed towards the top, left corner from Jose Holebas’ cross.

Unconvincing efforts from Jorginho and Higuain, and an optimistic, unsuccessful appeal for a penalty, represented the closest Chelsea came during the remainder of the first half.

It was after a short corner routine in the 48th minute that Loftus-Cheek headed the hosts into the lead. Watford’s Ben Foster was largely left stranded by Hazard’s cross from the right, and the midfielder was left with little more than to casually nod in towards the back post.

Another header followed just three minutes later. Again Hazard was the provider from the right, this time crossing directly from another corner, and with similar ease to Loftus-Cheek, Luiz ran onto his delivery to powerfully head past Foster and into the back of the net.

In the 75th minute Higuain made it 3-0, clipping a fine finish over Foster from close range after receiving possession back from Pedro with a fine through-ball.

Watford’s Isaac Success later had an effort ruled out when it bounced in off offside fellow substitute Gray – but it is Chelsea’s grip on third place, after a period in which Sarri has been heavily criticised and the top four has so often appeared beyond their reach, that will prove most significant.