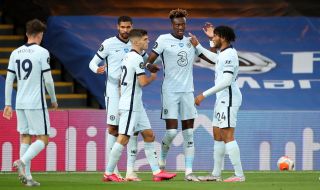 Chelsea remained on course for a top-four finish after getting the better of Crystal Palace in a five-goal thriller at Selhurst Park.

The Blues were in cruise control after Olivier Giroud and Christian Pulisic struck, but Wilfried Zaha ended his goal drought to give the hosts hope.

Substitute Tammy Abraham added a third for Frank Lampard’s side before Christian Benteke’s tap-in set up an intriguing finale.

But Chelsea held out to strengthen their hopes of Champions League qualification.

Despite the importance of the fixture, Lampard opted for 19-year-old Billy Gilmour over the experienced Jorginho in midfield, with N’Golo Kante unavailable due to a hamstring problem.

Several players had picked up injuries since the resumption of football and another was added to the list after six minutes, which contributed to the opener for Chelsea.

Reece James played the ball down the right wing and Gary Cahill, against his old club, pulled up while trying to track Willian’s run.

The Brazilian remained unaffected and cut back for Giroud to slot home from close range for his fifth league goal of the season.

Palace’s players remonstrated with referee David Coote to no avail and Roy Hodgson had to introduce Mamadou Sakho for Cahill, who headed straight for the changing room.

Chelsea almost added another before the home side could adjust, but Kurt Zouma headed wide from Willian’s corner.

It remained 1-0 until the first drinks break, but the Blues did increase their lead straight after in the 27th minute.

Willian was at the heart of it again and exchanged passes with Giroud before he found Pulisic on the left. The American worked a yard of space against Joel Ward and drilled in at Vicente Guaita’s near post.

At this stage it appeared Chelsea would run riot, but Palace responded in some style through Zaha.

The end-to-end feel to the game continued in the second period and Giroud headed over wastefully from James’ centre.

Palace remained a threat and Jordan Ayew had a shot deflected wide before Lampard introduced Abraham and Ruben Loftus-Cheek with 25 minutes left.

The double substitution had the desired effect as the duo combined for Chelsea’s third in south London.

Ex-Palace loanee Loftus-Cheek brought the ball forward and squeezed a pass through to Abraham, who slotted in off a post for his first goal since January 11.

Lampard was not able to relax during the final 19 minutes, however, as the hosts immediately hit back when Van Aanholt got in behind and picked out Benteke, who tapped in from close range.

Palace almost produced an equaliser deep into stoppage time too, but Kepa Arrizabalaga denied Scott Dann before Zouma slide in on Benteke as Chelsea consigned the hosts to a fourth straight defeat.